Colombia has the highest number of endemic orchids in the world, with approximately 4,300 species representing about 15% of the total existing globally. In the country, orchids have long been commercialised as ornamentals, either in the horticultural or floricultural trade. In 2017, The Center for Biological Research formed a partnership with the Colombian Orchid Society (SCO). This partnership was initiated to preserve orchids in the Colombian Andes, as well as their ecosystems, by involving local communities in creating in-situ and ex-situ conservation strategies and in developing an alternative mode of subsistence through legal orchid cultivation and commerce. We are providing the communities with the knowledge private collectors have and creating a partnership between collectors, communities and scientists in order to protect orchids, a flagship species for the Andean forests.

Since 1964 The Colombian Orchid Society (SCO) has been working to develop conservation projects to protect and preserved Colombian orchids.  As part of this work, the SCO acquired 200 hectares of land in Quebrada Bonita, Jardín, Antioquia in May 2016. Today this is an established Natural Reserve of the civil society granted by the Colombian Ministry of Environment through the National System of Protected Areas. The reserve belongs to the 14,000 hectares of protected mountain rain forest known as "District of Integrated Management: Cuchilla Jardín-Tamesis," which are possibly the best-preserved forests of Antioquia. Its native vegetation is tropical cloud forest, a very humid forest receiving a significant amount of precipitation in the form of cloud-borne mist that is intercepted by trees, and have closed canopy forest with high epiphyte loads [1]. The tropical Andes are global biodiversity hotspot harbouring twice as many plant species as the second-most diverse hotspot [2]. The area covers less than one percent of the land surface of the world, but harbours one sixth of the total plant diversity [3].

The “Cuchilla Jardín-Tamesis” still has large populations of the endangered Andean bear (Tremarctos ornatus), the pacarana (Dinomys branickii), and the puma (Puma concolor), among several other animal species that are endangered and/or endemic such as Black-and-chestnut eagle (Spizaetus isidori) or the Yellow-eared parrot (Ognorhynchus icterotis). Moreover, the Jardín cloud forest is considered to have a high diversity of epiphytes particularly orchid species such as the endangered Masdevallia hortensis, Odontonglossum septrumand species of the genus Dracula. The original forests still have large numbers of the most important timber species as well as the threatened Comino tree (Aniba perutilis), the Colombian Magnolia (Magnolia jardinensis), and the Colombian Ash (Fraxinus uhdei). The fate of tropical alpine ecosystems from Colombia is of major concern. Increased temperature, changing precipitation regimes, upward movement of the condensation belt, changing seasonality, extreme events (e.g. drought, floods), increased erosion and landslides on steep slopes and, upward migration of agriculture and human settlements are some of the observed ecosystem responses to changes in climate [1]. 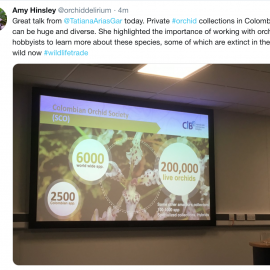 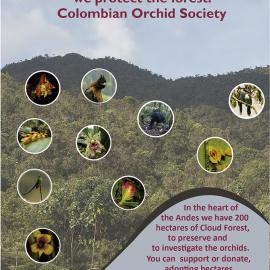 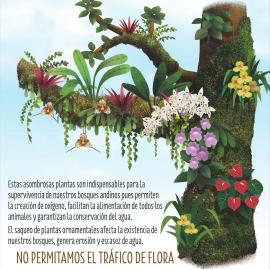 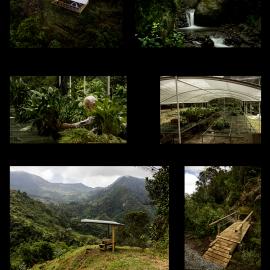 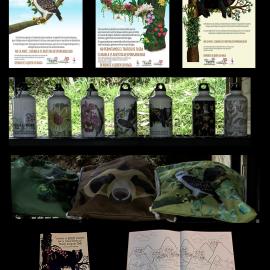 We aim to help preserve orchids and their ecosystems by involving different orchid stakeholders in raising awareness and education campaigns related to cloud forest preservation. The Colombian Orchid Society (SCO) is leading an outreach program to train local communities from Jardín, Antioquia and surrounding areas. A series of workshops and field schools for different age groups are being organised at La Reserva Orquídeas, including: legal orchid cultivation and commerce, and the cloud forest conservation importance. Innovative communication strategies such observation trails will also be implemented at la Reserva Orquídeas.