Akashinga, which means ‘Brave Ones’, is an all-female community-driven ranger program, developed by the International Anti-Poaching Foundation in the Lower Zambezi, Zimbabwe. The purpose is to empower disadvantaged women to restore and manage a network of wilderness areas, following the decline of trophy hunting, and to bring benefits to adjacent local communities. The project follows a bottom-up approach, working with rather than against the local population, training and educating vulnerable women as rangers to protect wildlife against poaching. The project is starting to make a difference, with rangers arresting over 70 poachers and providing social benefits to their communities.

Trophy hunting is in decline across Zimbabwe for a number of reasons including public perceptions, restrictions on trophy imports and reduced wildlife populations. This has limited the benefits local communities gain from living in areas adjacent to wildlife, increasing pressure on protected areas and allowing poaching to increase. It is estimated that 11,000 elephants have been killed in the Lower Zambezi valley over the last decade.

The Akashinga project was built on the need for a new approach to protect large areas of land that had previously been reserved for and financed by trophy hunting. It has a dual approach to empower disadvantaged women by training them as rangers and to reduce poaching. Akashinga is locally driven, retaining maximum available benefits and management responsibility to motivate conservation. At the heart of Akashinga is the knowledge that communities are the best defence against illegal wildlife crime.

Akashinga employs the most marginalised women from rural communities, who have usually experienced violence or sexual abuse, and who have never received an income. The project educates and trains recruits by experts in conservation and law enforcement, and the women who have graduated into the program receive the same law enforcement training and fulfill the same role as a male ranger. Recruits learn skills such as leadership, unarmed combat, patrolling, first aid, democratic policing, human rights, crisis management, information gathering and conservation ethics.

A ranger's main duty is to work with the community in order to stop illegal wildlife crime, and activities include patrolling within and around the reserve, interacting with community members and liaising with local authorities. The armed unit working inside the wilderness area is also supported by an unarmed village scout program working in the adjacent communities.

IAPF ensures that 72% of operational costs go directly back to the local community, with the aim to turn biodiversity conservation into a community project. This is a better financial return for the local community than what trophy hunting had previously provided. Furthermore, a woman with a salary in rural areas invests up to three times more than a man into their family and household. In turn, protecting the area and regulating access to the natural resources allows local communities to have the benefits of the land that they traditionally held.

The project partners directly with local stakeholders and traditional leaders, providing faster, easier and more stable access to management of wilderness areas over longer periods of time, focusing on areas that need support.

Although the project is in early days, some of the rangers have been able to buy small plots of land with their wages.

Five months after the pilot project was initiated more money per month was being put into the local community than trophy hunting had done per year.

The rangers have arrested over 70 poachers, feel empowered in their job and the project has led to a wide variety of social benefits in the local communities.

The rangers and communities now have an investment in conservation and retain the majority of benefits, ensuring local ownership of the areas.

Long-standing relationships have been created. 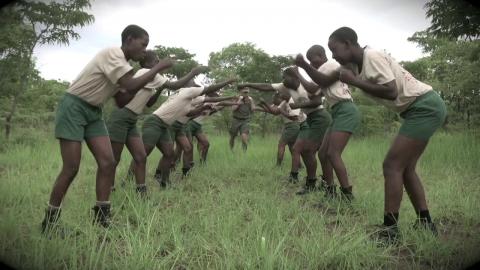