The Cambodian Crocodile Conservation Project (CCCP) is a multi-award-winning partnership between Fauna & Flora International (FFI), local communities and the government of Cambodia. It was established following an FFI-led expedition to the Cardamom Mountains in 2000, where the Siamese crocodile, thought to be effectively extinct, was rediscovered. The project aims to restore the Siamese crocodile population and use this charismatic reptile as a flagship species for conserving threatened rivers and wetlands across Cambodia. In close partnership with the Cambodian government and local communities, we have developed crocodile sanctuaries protected by local community wardens to safeguard the remaining wild crocodiles and their habitat. This is complemented with vital research and regular monitoring, as well as a successful conservation breeding and release programme.

Siamese crocodiles used to be abundant and widespread in rivers and swamps throughout Southeast Asia, including Cambodia, but their numbers fell during the 20th century due to the collection for crocodile farms, hunting, and habitat loss. By the early 1990s, Siamese crocodiles were thought to be “effectively extinct” in the wild.

Across its entire range, fewer than 250 adults remain, and most of these are in Cambodia.

The largest populations in Cambodia are located near settlements of indigenous communities who traditionally revere crocodiles and have protected them for generations. For example, the indigenous Khmer Dauem (Por) have been living in Cambodia’s Cardamom Mountains for many years and, through their customs and traditions, have been protecting the critically endangered Siamese crocodile. So it is no coincidence that these areas are a relative stronghold for the species, and why crocodiles in these areas were able to avoid much of the persecution and poaching that occurred elsewhere.

Focal areas include Veal Veng Marsh and the Areng River, both in the Cardamom Mountains, which hold the largest wild populations of Siamese crocodile:

STEUNG KIEW RIVER- Baklong Commune, Mondulseima District, Koh Kong Province. It is not near any villages, which provides an additional level of protection. 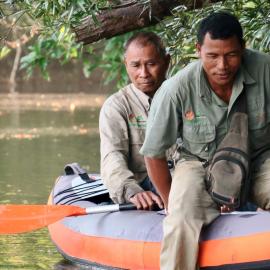 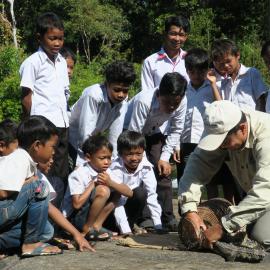 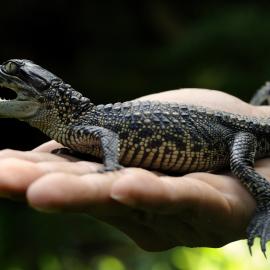 Over the last century, the Siamese crocodile has been driven to the point of extinction by commercial hunting, mainly for the international skin trade and the collection of live animals to stock crocodile farms.

Results from surveys indicate that in many parts of Cambodia gangs of crocodile hunters flushed animals into nets and dug them out of riverbank burrows to sell them alive to crocodile farms (there are around 900 crocodile farms and rearing facilities in Cambodia).

Illegal capture and trade continue to be a threat to Siamese crocodiles, although a combination of lower demand in recent years, extreme rarity in the wild and abundance in commercial farms, as well as ongoing protection and community engagement efforts, mean this is no longer the main threat to the species, which is now particularly imperiled by ongoing habitat degradation.

Between January 2001 and March 2004, at least 61 wild crocodiles were illegally captured in Cambodia which was more than 10% of the estimated wild population at that time (Daltry & Thorbjarnarson, 2004). Although poaching levels appear to have fallen (e.g. only three individuals were reported to be killed or removed alive in 2010: Starr et al., 2010, and no poaching incidents reported in more recent years), any extraction is a serious concern, given how few remain in the wild. One factor contributing to illegal trade is that there are many hundreds of crocodile farms in Cambodia that are permitted to rear Siamese crocodiles, but it is difficult for authorities to monitor so many farms and ensure none purchases or launders wild-caught crocodiles (Jelden et al., 2005). Unauthorised cross-border trafficking of crocodiles is also ongoing in Southeast Asia, despite wild populations being included in CITES Appendix I.

FFI is working with the indigenous Khmer Dauem to improve their food security, their business acumen and their capacity to conserve their cultural heritage, including the reptiles that they revere.

This initiative was developed through discussions with the communities on their issues, needs and wants, and focuses on three main strategies and outcomes:

1. Improve food security and find alternative sources of protein (away from fish, which depletes food resources for crocodiles and risks net-entanglement) by providing technical training on rice and chicken farming using a sustainable community participation methodology.

3. Build the communities’ capacity to monitor and protect their environment.

Community wardens are tasked with (1) raising awareness of the crocodiles and the local regulations to protect them, (2) gathering information about the crocodiles, threats and local attitudes, and (3) reporting serious illegal activities to the government authorities.

Based on recent estimates, these five sanctuary sites hold approximately 150 crocodiles, around 60% of Cambodia’s wild population. Wardens are using SMART patrols system within their sites to help us monitor, evaluate and respond to threats in each site more effectively; we receive reports from wardens on a monthly basis. Crocodile wardens patrol around 4000km annually, across five sanctuaries.

The project targets both men and women, with women particularly involved in the livelihood strengthening activities.

Bonuses when crocodile nests are found

Awareness raising and education around wildlife and protected area legislation, and promoting traditional values towards nature

Support to local crocodile wardens in community-managed sanctuaries (established to conserve three of the best remaining breeding colonies in the wild) continues to deliver ongoing protection to crocodile sanctuaries in our target areas.

With this ongoing presence zero incidences of poaching have occurred in the last decade (since 2011) (in contrast to high rates of poaching before wardens were deployed and before our outreach programmes began). Our protection and ecological restoration of the crocodile sanctuary sites will have a lasting impact on aquatic diversity, including endangered otters, fish, and turtle species. However, human activities especially fishing is having an increasing impact upon these areas. FFI is supporting community wardens to better coordinate with park rangers to address this threat.

Feedback from local communities shows that they have a strong awareness and appreciation of the wardens and their work..

Monitoring data shows that populations are stable or increasing across the target sites, with evidence of reproduction. This is exemplified by wild hatchlings sighted at various sites in 2020, and a female released in 2018 found nesting in the wild in 2020.

Following community consultation, three crocodile sanctuary management plans have been drafted (for O’Som, Tatai Leu, and Chhay Reap). In early 2016 all of our focal crocodile areas became nationally protected under the Ministry of Environment (MoE). We are waiting for the MoE to begin the process of developing management plans for the new protected areas, in which we can incorporate crocodile specific management guidelines.

Cambodia has made progress in reducing poaching and other dangers by forming groups of trained local wardens to monitor and patrol crocodile areas, providing appropriate livelihoods assistance to local communities so they can avoid damaging wetlands, and developing community regulations to avoid using the more high-risk types of fishing gear at crocodile breeding sites (Daltry et al., 2005; Oum et al., 2009). Given that the current population of crocodiles is very small and fragmented, such site-based intervention is critical. However, local management needs to be underpinned with higher level government protection and support to ensure people involved in the illegal capture and trade of wild crocodiles are caught, penalised and held up as warnings to others, and to safeguard the most essential waterways and their watersheds from incompatible developments.

If Siamese crocodiles are to repopulate wetlands from which they have been extirpated, it is vital to gain the cooperation of local people and decision-makers. People living in areas that no longer have crocodiles are often significantly more afraid of crocodiles than people who are still accustomed to living alongside them. There is, therefore, a need for further outreach using a range of media to raise awareness of Siamese crocodiles, their protected status and importance to Cambodia, and to demonstrate that people and Siamese crocodiles can coexist harmoniously. Villagers in the Cardamom Mountains who protect their local crocodiles could potentially be ambassadors for teaching and reassuring others that Siamese crocodiles are an asset and pose no danger when treated with respect.

Wardens must be able to count on the support of police, rangers or other enforcement officers, especially where they are vulnerable to intimidation by more powerful individuals or groups involved in illegal activities.

The report details the progress Fauna & Flora International (FFI) has made in the first year of this two year grant from PTES towards ensuring the recovery of the Siamese Crocodile in the wild. We are very pleased to report that at present we are on track to exceed our target release numbers of juvenile crocodiles into the wild. The success of this initiative continues to demonstrate its importance for the recovery of this Critically Endangered Species. Support to local crocodile wardens continues to deliver ongoing protection to crocodile sanctuaries in our target areas. 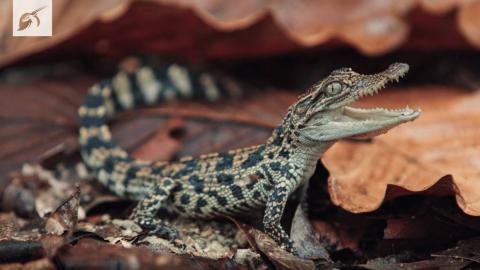 Many over many years, including PTES, CEPF, Darwin, Cool Earth, Disney, various zoos and private donors.