The Caribbean sharks education programme is aimed at fishing communities reported to be involved in the killing and illegal trading of whale sharks in Venezuela. It seeks to provide these communities with alternative, sustainable, biodiversity-based sources of income, whilst recognising their difficult living conditions. The programme includes school-based activities, public workshops and house-to-house visits with a view to raising awareness regarding the conservation status of whale sharks, and the need to participate actively, as a society, in protecting the species and marine ecosystems 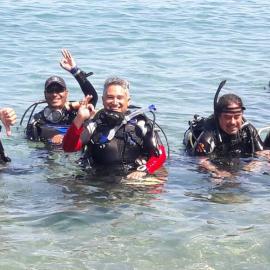 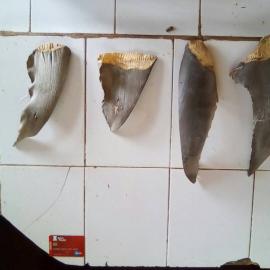 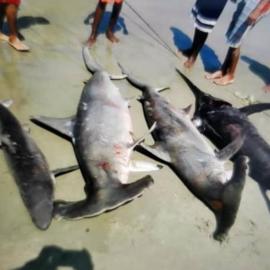 Poaching is carried out by members of fishing communities, who are attracted by offers from Asian citizens who have recently moved to Venezuela under economic cooperation agreements. Various private groups are involved in illegally trading shark products.

Communities are encouraged to poach sharks because it provides them with additional income. Most of these communities are very poor, plus there is no surveillance and monitoring by the authorities. In the four years prior to the project’s implementation, a total of 21 adult whale sharks were illegally killed for their fins and other products.

The project is being led by the Centro para la Investigación de Tiburones (Shark Research Centre), via a grant from the international organisation Ocean Care. The project's main strategy consists of countering the offer of illegal income with other, legitimate, sources of income through the development of tourism-related activities as well as the provision of other services. The project also seeks to raise awareness of ecological issues in fishing communities.

Training workshops are run for fishing communities on the importance of ecosystem services and in particular the role played by sharks in marine ecosystems. In addition, educational and awareness-raising programmes are carried out in local schools, at workshops for fishermen's associations and through personal visits made to communal meeting-places, unloading ports and even individual homes.

The project focuses on promoting marine products and sustainable ecotourism. Ecotourism activities have been launched in areas where no such activities were previously available. Support has been provided to communities to design plans and services adapted to local conditions, and for subsequent implementation and promotion at a national level. In addition, free advertising, including covering graphic design costs, is provided for all community entrepreneurs wishing to use the whale shark as a logo.

Further income has been generated by the sale of red lionfish, an invasive species causing considerable damage in the Caribbean. This has been achieved by contacting high-end restaurants in the capital, where the red lionfish is considered a delicacy and has recently begun to command high prices

Teams of volunteer scientists have been formed to help collect information of scientific value. Incentives for volunteers include the chance to attend national scientific events, free uniforms, recognition on social media and involvement in activities run by the Shark Research Centre.

Compensation is sometimes paid to fishermen for nets ruined or damaged by whale shark. This has encouraged them to keep photographic and audio-visual records, and also helps to avoid the use of prohibited nets, which are not subject to compensation.

Local communities receive health support, and food and clothing have been distributed among the most in need, especially those actively involved in shark conservation.

The project has been very effective, primarily because it has worked directly with communities that were previously involved in the illegal killing of whale sharks. No whale sharks have been captured in Venezuela in the last 17 months, nor has any intentional mass capture of hammerhead sharks been reported over the same period. The fins of other shark species are still traded across the National Parks where the project operates, however.

The project has been able to change community attitudes to nature. This has been particularly noticeable in schoolchildren, although many fishermen have also understood the importance of conservation in order to ensure the survival of the resources from which they derive their livelihoods. They have become aware of the value of live sharks given they now receive financial benefits from their presence.

By the end of the first year of project implementation, the first communities had started to receive income in exchange for shark-linked ecotourism services. Fishermen are beginning to devote one or two days a week to taking tourists out to newly-discovered diving areas, assuming responsibility themselves for surveillance and biodiversity protection. Increased demand for these services, despite the current economic depression in Venezuela, has brought hope to many people.

Free advertising for tourism services has helped to build a sense of community stewardship of sharks, and at the same time has transformed the local image. The result is a forthcoming meeting to allow fishing communities to share personal experiences.

Education has played crucial role, since most members of the target communities are largely uneducated. Some people have commented that taking part in this project has been the most important achievement of their lives, and they are very proud to be part of an international conservation movement.

The long-term support of donors has proved essential, with ongoing support vital to ensuring long-term community commitment to the project. Flexible resource management has also been valuable, as each community faces different challenges, which may require unforeseen actions and expenses.

The best results were achieved in the communities where the project had the greatest presence. Even though the same methods were used in all project areas, the presence of project officials proved to be an incentive for people. In addition, the support of community leaders is very important, especially in areas with high poaching rates. Some of the ports visited under the project are used by small-scale smugglers and drug rings, so visitors are not welcome. In these cases, accompanying local leaders enabled authorisation to work in the area, under the protection of internal security.

Communal brainstorming had a crucial impact on project implementation, with the most successful ideas put forward by the community itself. As bullying is common in the communities, it was essential to involve all members to avoid collective pressure from project opponents.

One of the main factors for success was the generation of alternative sources of income that were directly linked to the protection of the whale shark. Although the immediate economic benefits of ecotourism are lower than those expected from the illegal sale of sharks to traffickers, people are now aware that illegal income can only be received once, whereas the income derived from live sharks is sustainable over time and benefits many families.

An initial strategy, which attempted to reach out to everyone at the same time, proved ineffective as each group had different issues, which need to be tackled individually.

Intimidation has had no effect on traffickers. In fact, if traffickers feel threatened, they are likely to react negatively.

Offering compensation for nets damaged by sharks proved to be a major challenge. It was difficult to establish whether or not the nets were prohibited, leading to some fishermen being unhappy because they weren’t receiving compensation. Although compensation may save numerous whale sharks in certain areas, it can also prompt conflict with local communities.

A further challenge is the need to maintain the impetus of the project within communities where project officials cannot visit very often. In such cases, permanent channels of communication have to be established as it is difficult for a community to maintain motivation without outside support.

Although a legal framework exists, it is not applied in practice, because the authorities share financial and private interests with the traffickers.