The resurgence of poaching for rhino horn is a serious threat to the black rhino. Most rhino range countries are focussing on military-style enforcement strategies to counteract poaching. But not everywhere. Over the past 6 years in Namibia’s remote north-west Kunene region, where the world’s largest free-ranging black rhino population persists on formally unprotected lands, a more holistic, community-centered approach to rhino conservation-by has been established. It is a collaborative, local-level rhino protection institution known as the Conservancy Rhino Ranger Incentive Program.

The initiative is taking place on communal land in north west Kunene Region. Kunene is home to the Himba ethnic group. Compared to the rest of Namibia, it is relatively underdeveloped. This is due to the mountainous inaccessible geography and arid conditions that significantly hinders agriculture.

Rhino horn. Medicinal, ornaments, status symbols - which is driven largely by the demand from wealthy people/businessmen from China and Viet Nam. 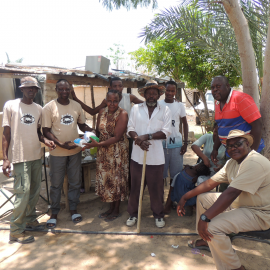 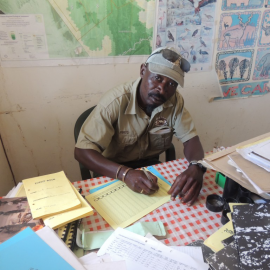 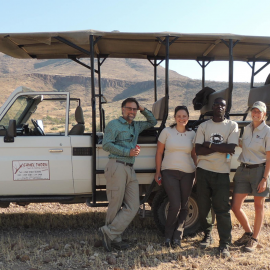 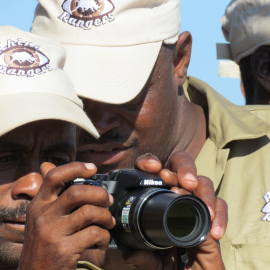 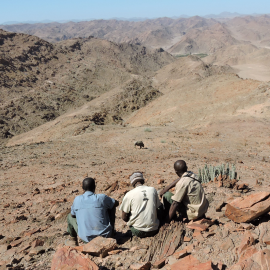 During the early 20th century as many as 850,000 black rhinos roamed the African plains. Relentless hunting in conjunction with land clearance rapidly reduced its numbers, and by 1960 the population had been reduced to approximately 100,000.

This wasn't the worst of it. Between 1960 and 1995, large-scale poaching caused a further 98% collapse in numbers, falling to an all-time low of 2,400 individuals in the mid-1990's. Accordingly, the black rhino is classified as Critically Endangered by IUCN.

Since the 1990s, and with enormous conservation effort, the population of black rhino has doubled to about 5,000-5,500 animals.

Namibia is a stronghold for more than one-third of these and is the largest concentration of free-roaming black rhino in the world.

Today, recovery of the black rhino is again threatened by rising wildlife crime—specifically poaching and black-market trafficking of rhino horn. The level of resources required to effectively counter poaching of black rhino in Protected Areas far exceed available budgets, making it almost impossible for the government alone to effectively protect this iconic species.

In the 1980s, like elsewhere in Africa, poaching of rhino in Namibia was rife. All rhino were managed and owned by the state. Communities were completely dissociated from wildlife, including rhino. They had no management rights, no say in decisions about rhino, or other wildlife, and gained no benefits from the species. The only interaction wildlife officials ever had with local people from surrounding communities was arresting them or interrogating them for poaching. Many people from the communities were poachers.

In 2011, in response to the escalating threats from poaching, community leaders already engaged under Rhino Custodianship Programme (RCP) and game guards (employed by the conservancies) realised that they could be more effective custodians if they had better training and equipment to monitor rhinos, which would, in turn, expand their income-generating opportunities from emerging rhino tourism. So they reached out and asked for help.

This was a declaration of their commitment to protecting one of the last truly wild populations of black rhino; recognising that their lives are better with the rhino than without.

Supported by the Ministry of Environment and Tourism, a small group of dedicated field conservationists and NGOs responded by forming a working group that sought to deliver targeted support to rhino custodians. A year later, the Conservancy Rhino Ranger Incentive Programme, in the Kunene region in Namibia, was implemented.

The Rhino Ranger Incentive Program is a direct, pragmatic mechanism that empowers the Conservancy's to fulfill their RCP responsibilities by strengthening anti-poaching vigilance. The approach taken is guided by the belief that securing a future for wild populations of rhinos depends on local people refusing to tolerate poaching, and rhinos being more valuable alive than dead.

To determine the best strategies to achieve the initiative’s objectives, program leaders met with local leaders to establish how best to harness the values of the community that would be good for the people they represented and for the rhinos. Local game guards were also asked to identify any barriers that were limiting their ability to conduct dedicated rhino patrols.

Understanding these local viewpoints and context resulted in the development and implementation of a number of strategies and motivations for local communities to engage in rhino conservation. These included:

Details provided in the following section.

For each conservancy, there are between 18 to 60 fully employed and paid Rhino Rangers are paid locally competitive wages (the conservancies contribute approximately US$100,000/year to support these salaries). Wages are complemented by non-financial benefits (described below).

The initiative has strengthened and expanded the capacity of local communities to monitor rhinos on their lands by providing an enhanced training curriculum, state-of-the-art rhino monitoring and field patrol equipment, and performance-based rewards that enabled and incentivised rhino ranger teams to undertake their duties effectively. Wages are also complemented by non-financial benefits such as such as uniforms, bi-annual team building events, training seminars, and certificates for achievement provided by Supporting NGOs.

Rhino Rangers visit a number of rural farmers on each patrol to raise awareness about wildlife crime and the consequences, in addition to building trust and strengthening willingness to cooperate by sharing information.

Once rhino ranger teams acquired the skills needed to effectively monitor the rhino on their land, training in rhino tourism and the development of community-led rhino tourism activities occurred. This helped generate critical finances needed to sustain rhino monitoring and enhanced the value local people placed on keeping rhinos alive. This also provides opportunities for rangers to interact with foreign tourists and receive their feedback (which is almost always very positive) on their work. This appears to be a considerable morale booster for the Rangers resulting in higher performance.

Cultivate local pride - A logo and motto was developed from the onset which created a sense of unity, reinforced local ownership and generated momentum and pride around a clear cause. The logo for this initiative depicts a rhino inside the pupil of a human eye with the slogan "keeping an eye on our rhino."

Additional training of both rangers and other local people to provide local outreach and awareness raising activities in their communities has also been undertaken.

Indicators of success include:

Only recently have communities been receiving tangible benefits from rhino through the initiative, and although this has increased support for rhino conservation, the basis for communities to act as rhino stewards provided a renewed opportunity to begin building a locally-grown sense of ownership and norms that reduce tolerance towards rhino poaching.

Although the strategies used in this initiative (such as increased vigilance and close monitoring, and improving community attitudes toward rhino) has been very successful in the fight against rhino poaching, these alone will not completely stop rhino poaching. Further prevention requires a range of interventions, as described below:

There are synergies between these 'lines of defense' that also need to occur for success. For example, the Rhino Ranger programme also provides the necessary skills and knowledge to create income-generating opportunities (such as tourism) that may improve attitudes. Also, the inclusion of police officers in the ranger patrols has helped, in some but not all cases, to build local trust and respect.

This initiative is a leading example of how communities can effectively lead the protection of wildlife and clearly demonstrates that having ‘rights’ to manage and benefit from rhino coupled with a strong sense of ‘ownership’ provide a foundation for effective community engagement in the fight against poaching.

The game-changer has been the collaborative multi-stakeholder approach that has harnessed each contributor's skills and expertise in a way that benefits both rhino and local people.

Only recently have communities been receiving tangible benefits from rhino through the initiative, and although this has increased support for rhino conservation, the basis for communities to act as rhino stewards provided a renewed opportunity to begin building a locally-grown sense of ownership and norms that reduce tolerance towards rhino poaching.

Other factors that enabled success include:

The introduction of the Nature Conservation Amendment Act 1996 provided a legal foundation for local people living in communal areas to form conservancies as a basis for conditional rights to manage and benefit from wildlife on their lands. Conservancies started to form and enter into contracts with the tourism sector and trophy hunting operators, and new income was generated. Wildlife populations, including rhino, began to recover. The creation of new sustainable livelihood opportunities provided another incentive to protect the rhino.

As conservancies became self-sufficient they took on the responsibility of paying the game guards, who became conservancy employees.

The collaborative multi-stakeholder approach - the diversity of government, NGO, community and private sector support - that harnesses each contributor's skills and expertise in a way that benefits both rhino and local people have been pivotal for achieving rhino conservation at this scale.

To determine the best strategies to achieve the initiative’s objectives, program leaders met with local leaders to establish how best to harness the values of the community that would be good for the people they represented and for the rhinos. Local game guards were also asked to identify any barriers that were limiting their ability to conduct dedicated rhino patrols. Understanding these local viewpoints and context resulted in the development and implementation of the strategies employed by this initiative.

The initiative is not without challenges, including:

There remains a lack of capacity in Conservancy leadership to fully manage the programme, although this is highly variable.

Although significant funding has been raised through rhino tourism, support NGOs are still providing the majority of the financial inputs.

Local communities can not restrict access or use of properly licenses firearms in the rhino range on communal lands.

Harnessing values to save the rhinoceros - insights from Namibia

The rate at which the poaching of rhinoceroses has escalated since 2010 poses a threat to the long-term persistence of extant rhinoceros populations. The policy response has primarily called for increased investment in military-style enforcement strategies largely based upon simple economic models of rational crime. However, effective solutions will probably require a context-specific, stakeholder-driven mix of top-down and bottom-up mechanisms grounded in theory that represents human behaviour more realistically.

Using a problem-oriented approach we illustrate in theory and practice how community-based strategies that explicitly incorporate local values and institutions are a foundation for combating rhinoceros poaching effectively in specific contexts. A case study from Namibia demonstrates how coupling a locally devised rhinoceros monitoring regime with joint-venture tourism partnerships as a legitimate land use can reconcile individual values represented within a diverse stakeholder group and manifests as both formal and informal community enforcement.

We suggest a social learning approach as a means by which international, national and regional governance can recognize and promote solutions that may help empower local communities to implement rhinoceros management strategies that align individual values with the long-term health of rhinoceros populations.

The Auxiliary Game Guard System in northwest Namibia, and its role in black rhinoceros conservation