Nicaragua is home to globally important populations of threatened marine turtles and two of just nine mass nesting arribada beaches worldwide are found here. Poaching of eggs and killing of hawksbills for their shells has been a serious threat to these species in Nicaragua. In response, FFI and partners are working in collaboration with coastal communities to turn the tide around and protect these species. Local people are now involved in beach patrols and build & manage turtle hatcheries, and are trained in monitoring techniques for data collection. Furthermore, local and national support for these marine reptiles is being catalysed through turtle festivals, education and awareness campaigns. The initiative has been highly successful: over 50% of the known population of hawksbill turtles in the entire eastern Pacific Ocean is now protected, leatherback nesting and hatchling success are increasing for the first time in decades; and poaching has significantly decreased, providing new hope for the recovery of these threatened species.

Marine turtle eggs - In Nicaragua, turtle eggs are a traditional, seasonal food source amongst coastal communities, where poverty rates are high.  Eggs are often consumed alongside alcohol, or as part of Catholic abstinence from meat products on a Friday. 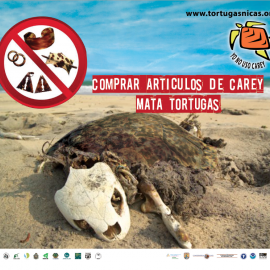 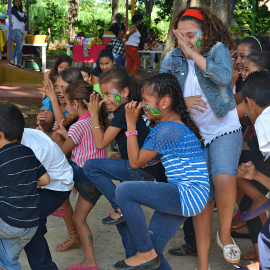 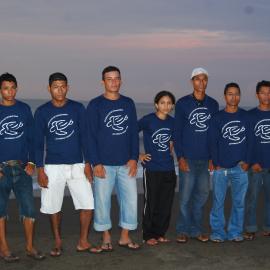 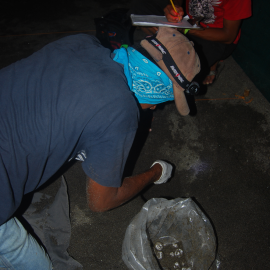 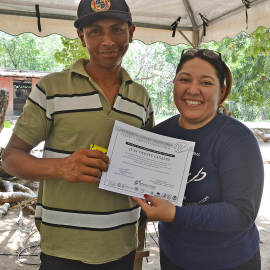 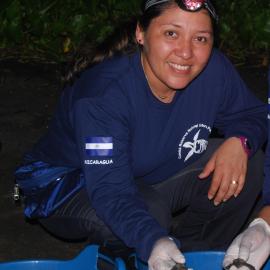 The global hawksbill turtle population has collapsed by an estimated 87% over the last three generations - and threatens the future viability of the species. Nowhere is this more apparent than in the Eastern Pacific, where from Mexico to Ecuador, populations have collapsed to the point that they were deemed close to extinction in 2007 (Mortimer & Donnelly, 2008). Around 500 nesting females are estimated to remain in this once abundant and distinct Eastern Pacific population (Gaos et al., 2010).

While leatherbacks are globally classified as Vulnerable, the distinct sub-population of leatherback turtles in the Eastern Pacific has suffered a historic collapse (Benson et al., 2015) and is now classified as Critically Endangered. Long-term analysis indicates that the population has plummeted by 97% over the past three generations, while nesting abundance has declined more than 90% since the 1980s, down to fewer than 500 nesting females (Wallace et al., 2013). Experts predict that without immediate conservation action, the Eastern Pacific leatherback could be extinct within the next generation.

The medium-term trend for the Olive Ridley turtles in the Eastern Pacific is positive, although this needs to be confirmed through further years of monitoring and research.

In Nicaragua, turtle eggs are a traditional, seasonal food source amongst coastal communities. Many coastal people, who depend on agriculture and fishing, are poor and lack security or sustainable alternatives.  They perceive turtles as a source of supplementary income, through poaching eggs or killing hawksbills for their shell, rather than as a valuable living asset of which they are beneficiaries and custodians.

Illegal harvesting of eggs remains near 100% at nesting sites without conservation management and this remains the most significant threat to population recovery. Enforcement at priority nesting sites (as per project sites listed above), including the olive ridley mass nesting beaches in the south of Nicaragua's Pacific where partnership with the army protects nesting turtles.

The majority of raw hawksbill shell is thought to come from the Caribbean coast, where turtles are commonly poached by coastal community members for their meat.

Working in collaboration with local stakeholders - including coastal communities and local governments - is central to FFI's approach.  Through this initiative we have:

Specific sections of the community are targeted for involvement: particularly ex-poacher (via incentive schemes), women (mostly wives of fishermen and former poachers).

FFI also provides economic incentives to local community members for their support in collecting turtle eggs and observing adult female turtles. This scheme rewards people for notifying project conservation teams about nests being laid, instead of poaching the eggs, and is proving highly-effective in cultivating strong community support for conservation efforts and in reducing residual poaching pressure. Incentives are paid once the eggs are protected in the hatchery (per number of eggs safely translocated); a second payment is made for hatchlings released to sea, to ensure nests are not damaged before brought to the attention of patrol teams. Incentives are paid as credits at a local kiosk or general store, to keep the benefits within the local economy.

Over the last decade, a series of wider public education campaigns are gradually changing public perceptions about eating turtle eggs.

FFI engages local community members in project implementation and development, through direct employment, engagement in discrete project activities, sharing of project results through end-of-season workshops, and through participatory fora, such as the Chacocente Management Committee and the Hawksbill Committee in Estero Padre Ramos, through which community members have an opportunity to influence decision-making around natural resource management at these sites.

The initiative employs members of the local community as patrol teams for nightly patrols (foot/boat) and hatchery managers.  The patrol teams monitor and protect marine turtles and their nests along a total of 31km priority nesting beach (exclusively men, but women can participate) → currently 35 people employed seasonally, across 4 sites.  Teams are equipped and trained in line with internationally agreed monitoring protocols (including data collection standards) and hatchery management protocols (including egg handling, use of field equipment).

FFI provides economic incentives to local community members (i.e. not those already employed as patrol team members) for their support in collecting turtle eggs and observing adult female turtles. Incentives are paid once the eggs are protected in the hatchery (per number of eggs safely translocated); a second payment is made for hatchlings released to sea, to ensure nests are not damaged before brought to the attention of patrol teams. Incentives are paid as credits at a local kiosk or general store, to keep the benefits within the local economy. This approach, alongside effective collaboration with local people, is helping to secure a turnaround from 100% of nests being poached to >90% of nests protected.

In addition to financial performance-based incentives, two internet platforms exist for reporting / gathering intelligence on incidences of poaching (www.tortugasnicas.org, managed by FFI, and www.savingpacificleatherbacks.org).  A national WhatsApp group also facilitates communications and information sharing between local patrol team members who have mobile phones and other turtle conservationists working in Nicaragua (27 members in 2018).

National awareness campaigns led by FFI since 2007 have increased awareness amongst Nicaraguans (to ~80% of the population) that the consumption of marine turtle products is illegal and the need for their conservation.  However, our research has shown that this increased awareness isn't translating into changes in behaviour (poaching or consumption, despite strong sanctions if prosecutions are brought).

Next phase aims to cultivate measurable behavior change and make the consumption of turtle eggs and products increasingly socially unacceptable in Nicaragua.

NB.  All initiatives related to tourism have been affected by the civil unrest which broke out in Nicaragua in April 2018 and is ongoing.  This situation has severely reduced tourism in Nicaragua.

FFI is working to inform and engage artisanal fishers from fleets near Chacocente, EPR and ASE to strengthen their understanding of fisheries legislation - specifically the content of chapter 5 of Law 489 Fisheries and Aquaculture Law, which deals exclusively with artisanal fisheries, and the 12 articles of the Code of Conduct for Responsible Fishing - improve fisheries management and improve compliance with existing legal standards for fishing gear - which can be harmful to turtles.

In 2018, the project team began working with a specialist in ‘Participatory Market System Development’ to help fishers from EPR to explore preferential market opportunities for sustainably caught fish, through an initial market mapping process.

FFI's programme directly employs 35 members of local communities (as patrol team members, community coordinators, hatchery managers). FFI's programme provides incentives for support in collecting turtle eggs to bring back to the hatchery (versus poaching), observing adult female turtles, notifying conservation teams about nests being laid → all are paid as credits at a local kiosk or general store to keep the benefits within the community.

The project is generating pride in and commitment to turtle conservation among a range of stakeholders, through community-based protection strategies, the facilitation of community participation in natural resource governance, the use of incentives for protection over poaching, environmental education and awareness raising activities, and the promotion of sustainable livelihood options related to turtle conservation.  Participation in and support for turtle-themed activities and events among coastal community members is high, with many activities now being led by partners and stakeholders.

While marine turtles are long lived creatures and any change in population status is unlikely to be measurable for decades to come, the long-term data that we compile is allowing us to monitor the population.  We are starting to be able to identify some trends, although these should be interpreted with caution.  Nevertheless, thanks to all those involved in FFI’s marine turtle conservation program – project staff, partners, local stakeholders and donors - the majority (98%) of Nicaragua’s nesting leatherback and hawksbill turtles and their nests are now protected, in places where otherwise 100% of these eggs would be poached.

Marine turtles are now an increasingly important emblem for the natural environment in Nicaragua and these approaches have contributed to more positive attitudes towards marine turtle conservation amongst those living closest to them. Sea turtles are beginning to become a living asset rather than just a piece of jewellery or plate of eggs.

Nevertheless, the illegal harvesting of eggs is estimated to remain near 100% at sites where conservation activities are not carried out. A culture of consuming turtle eggs persists among coastal communities and urban consumers, while demand for turtle shell products remains considerable, driven often unwittingly by national and international tourists - despite a national ban on consumption of turtle products since 2006.

The successes of this initiative can be attributed to an number of factors:

Programme of work to address illegal trade in turtle products (eggs and shell) in Nicaragua is embedded within FFI's wider programme of work to conserve Critically Endangered marine turtle populations in the Eastern Pacific of Nicaragua.  FFI has been successful in securing long term donor support for this work, although it requires significant investment in fundraising / donor relations to maintain this funding flow.

The shared vision is the easier bit, but then in terms of getting people on board it can be more difficult due to particular individuals or particular contexts (political, funding, government policies...) at a given time and impedes success.

FFI has been working to conserve marine turtles in Nicaragua since 2002.  Working in partnership with local stakeholders is central to our way of working.

Since 2010, the incentive scheme has been a key contributor in significantly reduced poaching rates at Padre Ramos and offers comparatively high value for money by mitigating poaching, securing community buy-in to project aims, and in achieving long-term conservation outcomes

Legislation protecting turtles in Nicaragua is strong, but implementation (and support for implementation) of those policies is weak.

Nicaragua passed a national ban on trade in marine turtle products in 2005, which represents the strongest national legal framework protecting marine turtles in Central America. The ban is important: it avoids any problems of laundering illegal eggs if the trade was legal, and if eggs are for sale, they are illegal.

However, enforcement of this law and international treaties to prevent illegal exploitation and trade is weak.

For example, artesanal fishing grounds / rights are not well defined or maintained.