Effective behavior change campaigns in South American countries are limited by heterogeneous quality in design schemes and language barriers that impede the adoption of existing best practices. We propose to increase the adoption of best practices for such campaigns and their taxonomic and geographic reach by: 1) implementing theory and evidence-based campaigns for two Venezuelan threatened bird species, with contrasting illegal trade dynamics, and 2) generating tools and guides to design and monitor campaigns adapted to regional conditions and language. 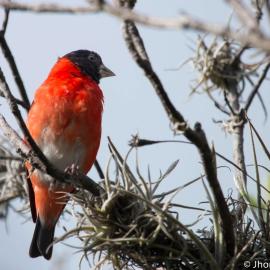 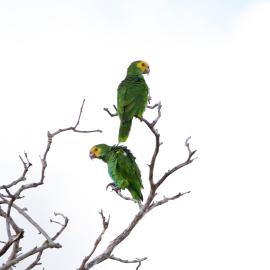 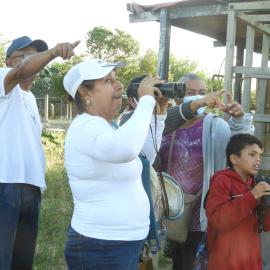 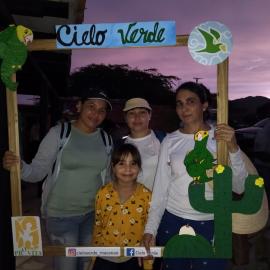 The Yellow-shouldered Amazon is a threatened species listed as “Endangered” in Venezuela and included in Appendix I of CITES. In Venezuela, most Yellow-shouldered Amazons, parrots henceforth, are found on Macanao, Margarita Island, where 3 of every 10 people keep YSA as pets. The primary motivations behind parrot demand are affective attitudes towards parrots, and misguided perception of benefits from human protection. Women are important actors in the illegal parrot trade chain. The absence of fathers, sons, and husbands while on long fishing trips (primary economic activity dominated by men), creates strong emotions of loneliness in wives, mothers, and daughters. Parrots are a frequent tool for managing these emotions: they are described “as a part of the family” and are presented as gifts from relatives to alleviate loneliness. Knowledge of parrot biology and concern for their conservation problems is high among Macanao communities, but people with higher educational levels express higher intentions to keep parrots as pets, suggesting that knowledge is used to reinforce misguided empathy, rather than to change behaviour in a way that reduces demand. We are implementing a behaviour change campaign entitled Cielo Verde (Green Sky) focused on encouraging, in Macanao communities, participation in outdoor activities as an alternative to supplement the benefits provided by pet parrots (companion and entertainment). We think that if we successfully promote social norms and positive attitudes towards be involved in outdoor activities, as well as spaces and opportunities where people can enjoy their favourite birds, without keeping them captive, we could generate the change we want: in the medium term, reduce the demand for the Yellow-shouldered Amazon, and in the long term, their illegal trade.

The Red Siskin is a threatened species listed as “Critically Endangered” in Venezuela and included in Appendix I of CITES. Currently, at least 368 red siskins are traded per year (most of them suspected wild-caught). This rate is expected to have a high negative impact on the remaining small populations present in Venezuela (< 6,000 individuals). The key actors demanding red siskins are breeders, who are mostly middle-class professional males, between 30-46 years of age, who profess a deep interest in improving their breeding skills and are motivated by recognition among peers, more than profit. Demand for red siskins appears to be driven by breeders' belief that maintenance of genetic variability in the captive stock could be more easily achieved by including wild-caught red siskins. This misguided belief is enhanced by the fact that the closed community of red siskins expert breeders lacks tools and channels to share expertise with the more inexperienced breeders, particularly across language barriers, perpetuating misguided and unsustainable captive-breeding practices among. We are implementing a behaviour change campaign, Anidando Futuro (Nesting Future), focused on promoting in breeders from Venezuela, Brazil, and the iberian node Spain-Portugal, social norms and positive attitudes towards the adoption of sustainable breeding practices that exclude wild-caught red siskins. The campaign will also create spaces (forums, meetings) where breeders can acquire, discuss, and disseminate these practices among their peers so that they can enjoy their favourite bird, while applying effective and efficient breeding practices.

For the Green Sky campaign, the audience consisted of non-professional adults (“Macanagüero de a pie”) and young adult professionals from Boca de Pozo and Robledal communities. Both groups are dominated by adults (30 -50 years old) and seniors (>60 yo) women.

Our campaigns tackles inclusivity of gender and age by: