In 1998, HUTAN, a French NGO, partnered with the Sabah Wildlife Department in Malaysian Borneo to establish the Kinabatangan Orang-utan Conservation Programme. Initially, the programme focussed on research specific to the orang-utan but has now grown to include working with communities to address human-wildlife conflict and developing alternative livelihoods. The team now comprises more than 50 highly skilled staff from the local community, who work in close collaboration with an effective network of partners. HUTAN aims to prevent the extinction of the orang-utan and solve human-wildlife conflict through the active engagement of all stakeholders, and by creating innovative mechanisms that address local development and conservation.

The Kinabatangan floodplain of Malaysian Borneo encompasses about 60,000 ha of forests. Roughly two-thirds of this is protected, and 400,000 ha of land comprises oil palm plantations and other human landscapes. 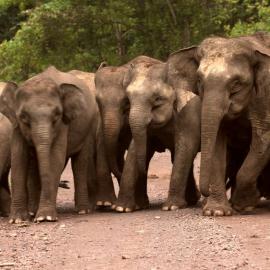 Traditionally, local communities have not participated in forest hunting but there are now increasing threats from outsiders who enter lower Kinabatangan in search of game or trade species. Human-elephant conflict is also on the rise, leading to increased poaching from retaliatory killings.

Generally, communities are not involved in, nor support, illegal wildlife trade. For the small minority of community members who do engage in poaching, this is usually in retaliation to conflicts or when species are seen as pests. The exception to this is illegal harvesting of edible nest swiftlets, which has caused a serious decline in the species’ population and in some areas, local extinctions.

In addition to orang-utan specific research, HUTAN has designed and implemented a number of community-based initiatives.

In response to threats to wildlife and protected areas, the Sabah State Government made a provision to appoint Honorary Wildlife Wardens (HWW) through the Wildlife Conservation Enactment of 1997 (WCE). Staff from HUTAN were first appointed as HHW in 2001 after training sessions and upon successful completion of a test. In 2008, HUTAN also established a dedicated team to work on HWW full-time. Today HUTAN is equipped with 24 HWW.

Since 2008, HUTAN has been working to rehabilitate critical orang-utan habitat, with the aim of recreating forest corridors for wildlife. Two of the biggest threats to the lower Kinabatangan region is forest degradation and fragmentation, and due to past logging activities fast-growing tree species need to be planted in order to promote natural forest regeneration.

Initially, four women from local villages were hired and trained and three plots were selected for seed planting. The survival and growth rates of the planted seedlings were monitored monthly, and protected by an electric fence to prevent crop-raiding by elephants.

Since 2009, HUTAN and the Sabah Wildlife Department (SWD) have worked together to develop a recovery programme for the edible nest swiftlet population in the area. The project aims to combine conservation with economic benefits to the Sukau community. Nests are an important traditional Chinese medicine and have been harvested and traded since the 14th century. Three cave systems, once owned and exploited by local families, are now the property of the government and are managed by SWD.

Traditionally, bubu (prawn/fish traps) were made from tree bark, and fishermen would venture illegally into protected areas and unintentionally damage the trees by removing the bark. HUTAN developed a suitable alternative by working with experienced fishermen from the village to experiment with various types of environmentally friendlier materials. The best alternative to tree bark is plastic wire mesh, as it is quick and easy to make. The new bubu has spread to surrounding villages and HUTAN provides a small loan to cover the cost of equipment as well as free training.

Since 2002, a team of 24 villagers has been employed as Honorary Wildlife Wardens. They are granted the same legal powers as rangers, allowing them to enforce laws and apprehend offenders if necessary.

HUTAN also hired 13 members of the Sukau community to guard the caves against nest thieves and other intruders to protect the edible-nest swiftlet.

HUTAN has supported the Sukau Homestay Programme since 2002 - where communities have exclusive rights for ecotourism. In 2016, 14 families were members of the Sukau Homestay, receiving a total of 624 tourists and generating an income of nearly $50,000 for the community.

Sustainable harvest of the edible-nest swiftlet for local trade.

Jobs have been created in wildlife monitoring, management of the sanctuary and collecting scientific data.

In 2004, ‘Fishermen for Conservation’ was established to find sustainable alternatives to traditional fishing traps made from tree bark.

The Wildlife Surveys and Protection team (WSP) are available 24/7 to help the community minimise wildlife conflicts. The team regularly conduct night patrols in villagers’ fields and help to maintain electric fences to prevent crop-raiding. The team is also working with the communities to design a fence that will allow animals to move freely across a larger landscape.

Since 2000, HUTAN has been monitoring the levels of human-wildlife conflicts within the lower Kinabatangan region, assessing their causes and working with the Sabah Wildlife Department to develop innovative solutions to mitigate these conflicts.

In 2002, HUTAN set up the Elephant Conservation Unit (ECU) with a group of villagers to assist local farmers to efficiently control wildlife crop-raiding damages in village orchards and small-scale palm oil plantations. Combining traditional knowledge of the local wildlife and area with intensive technical training, the ECU has so far succeeded in greatly reducing the extent of damages caused by elephants to the villagers’ crops. Today, the ECU works closely with the Honorary Wildlife Wardens.

In 2016, four workshops were held with communities to share experiences of human-elephant conflict and to discuss long-term solutions.

Since 2008, HUTAN has supported the development of community tree nurseries as an alternative source of income for village families. In addition, with the creation of the seedling collection centre in 2016, they were able to increase purchases of seedlings, generating an income for 18 village home nurseries.

In addition, job opportunities have been developed for women in the HUTAN reforestation team.

HUTAN is embracing a community-based approach. Except for the two programme directors (Drs Isabelle Lackman and Marc Ancrenaz), the entire team of KOCP field researchers (more than 60 persons) is originating from the villages of Lower Kinabatangan. At HUTAN, we believe that the villagers who are sharing the same environment with elephants and other species are the key actors to ensure the long-term maintenance of these animals outside of protected forests in Sabah. We not only need to harness the support of local communities in our conservation efforts, but we need their active involvement in all activities described in the proposal. Being members of local communities themselves, the KOCP teams are in a unique situation to develop a trustful relationship with other villages and communities.

All HUTAN activities are decided, developed and implemented by local community members. Direct benefits for the local staff are gained through direct empowerment to manage their own natural resources, income security and opportunities for capacity building (including traveling, attending conferences, personal career development and etc.). Recipients of our conservation efforts are also primarily community members.

In 2003, HUTAN implemented an Environmental and Awareness Program (HEAP) after recognising the lack of environmental education for rural communities. HEAP runs programmes for nursery, primary and secondary schools in the region. Each programme is individually tailored and features outdoor activities. In 2016, HEAP conducted 49 programmes in total in 7 districts.

Alongside this, HUTAN runs community awareness programmes with various events such as earth days and festivals.

- Yearly market raids as part of campaigns led by local authorities to halt the illegal sale of turtle eggs, resulting in several hundred eggs seized since 2016

- Illegal tree felling and bark harvesting has reduced within the region as a direct result of the fishermen for conservation initiative, with more than 10,000 trees saved

Compared to our baseline data, we have witnessed a decrease of HWC over the years since we started our activities. In particular:

-Protection of graveyards with electrical fences resulted in a halt of damages and conflicts with elephants. Then people’s perception started to be more positive toward elephants

-Formation and training of teams of villagers who would patrol and mitigate conflicts was successful in decreasing the conflicts by more than half. More importantly, villagers started to understand why there were conflicts: i.e., wildlife is losing its habitat and hence need to go into people’s crops to survive.

-Tourism activities developed in the area started to benefit increasingly local communities. Villagers started to understand the financial value of wildlife presence in their vicinity. In this case, it is easier for villagers to accept a certain level of conflicts when animals offer alternative sources of incomes

Poaching has also decreased because of increased patrolling efforts: the patrols are recording y the number of cases of illegal activities.

The Wildlife Enactment, 1997 allows people from any community to train to become Honorary Wildlife Wardens, which is very important to fostering environmental stewardship. Furthermore, the government of Sabah has been key enablers for certain aspects of the project.

The heart of our long-term success lies with local communities: villagers need to become actively involved as guardians of their natural resources, and not only seen as passive collaborators. Such an approach is possible with any community but requires time and patience (hence a long-term commitment over more than 10-15 years).

There is relatively poor communication and collaboration between the different sectors in charge of policies development or implementation.

Additionally, there is poor law enforcement, for example, poachers have only just started to be prosecuted in Sabah, and some officials may even be involved in international trade.