The Guatemalan beaded lizard was feared extinct as a result of the illegal pet trade, until 2002 when a local Guatemalan NGO called Zootropic began a wide-ranging conservation project to help the country’s lizard populations. The beaded lizard was eventually located via a local poacher, who then became one of the projects biggest supporters. Zootropic has since undertaken a number of different activities, many of which involve local communities, to help safeguard the beaded lizard and other species against illegal capture and trade.

Some of the remaining populations of the Guatemalan spiny-tailed iguana and the Guatemalan beaded lizard live within the Heloderma Natural Reserve (HNR), a 58 ha protected area and one of the best preserved dry forests in Central America managed. The reserve is managed by the local NGO Zootropic and is located near the town of El Arenal, in the Cabañas Municipality.

HNR is surrounded by 8 local villages and one main town, with a total of around 25,000 people. Locals work mainly in agriculture, maize crops and watermelon farms.

Live animals for the pet trade and plants for the ornamental trade. 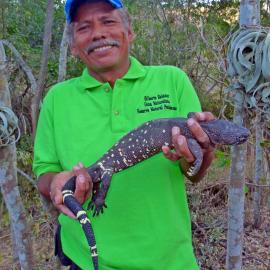 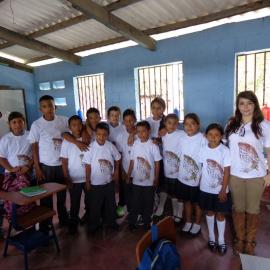 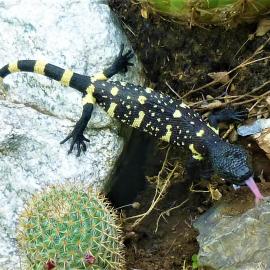 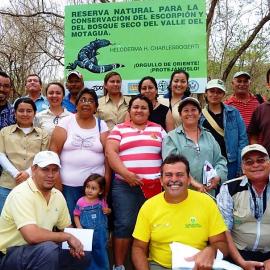 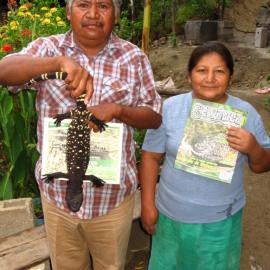 The situation in Central America is optimal for illegal trade: there is a high demand for many species, a lack of enforcement, bribery is well accepted, and immense poverty causes people to take risks for little profit. In addition, border control and government communication between countries is lacking, and smuggling routes are already well established because of the drug trade. Guatemala has been identified as an important route into El Salvador, from which animals are illegally sent to Europe. This route is also used for legal shipments of green iguanas (TRAFFIC reports over 225,000 green iguanas were imported into the EU from Central America from 2005 to 2006).

The illegal trade involves local villagers who collect wildlife and sell them to local buyers, who then resell to a main trader, before being imported to Europe or the USA. Spain and the Czech Republic have been identified as key entrance ports.

The remaining population of the Guatemalan beaded lizard is believed to be around 500 individuals. From 1993 to 2003 at least 10% of the population was taken from the wild to supply the illegal pet trade in the USA and Europe. Guatemalan authorities have identified one Mexican (who partially resides in Spain) and one Czech national as playing major roles in trade route to Europe.

In addition, the Law Enforcement Management Information System of the U.S. Fish and Wildlife Service, reported 240 wild-caught Guatemalan spiny-tailed iguanas taken for commercial purposes in 2008, which was allegedly unknown to Guatemalan authorities. Locals advised that 50–60 individuals were collected for export each month and that they have noticed a dramatic decline of the species in the past 20 years. Researchers have also reported the extirpation of several of these populations following extensive surveys.

Locals are usually involved in IWT through aversive hunting of beaded lizards due to their venomous nature and due to a lack of economic alternatives for bushmeat. They also engage in IWT due to income from selling lizards and iguanas for the international pet trade or bromeliads for the international ornamental trade.

The story of Zootropic’s work in the Motagua Valley sounds like the plot of a Hollywood blockbuster: a young, idealistic scientist teams up with a grizzled and cynical animal smuggler to bring a virtually unknown creature back from the edge of extinction. The difference is, this time it’s all true and incredibly, was pulled off with an initial budget of only $40 a month!

The first scientifically recorded sighting of the Guatemalan beaded Lizard took place in 1984, but when no more living examples were found by the mid-1990s, it began to look as if the reptile had almost certainly died out. In 2002, the Guatemalan organisation, Zootropic, began a wide-ranging conservation initiative to safeguard the future of the country’s lizard-life, which ultimately led the then 20 year old undergraduate student, Daniel Ariano, to take on the challenge of finding out if it really had become extinct.

The early days of the project truly unfold like a story from a film: funded on a shoestring, and with no spare cash to provide a vehicle, Daniel was forced to do a 14-hour round trip by bus from Guatemala City to the lizard’s habitat in the Montagua Valley. His attempts to discover all that he could about this elusive and little-known species from the villagers ultimately led him to see an article in a newspaper about one man, described as a local poacher, who caught native animals for the wildlife trade. What caught his eye was not the story, but the accompanying photograph - Gilberto Salazar was holding the unmistakable shape of a beaded Lizard!

With the proof that, at least until very recently, these rare reptiles were still alive and that one person knew how and where to find them, Daniel set out to track down Gilberto. In all the best traditions of the cinema, their first meeting was a predictably tense one, with Gilberto holding Daniel at gunpoint while the young scientist tried to explain what he was hoping to do. Gilberto had obviously seen all the right films himself, as after a brief show of reluctance, he agreed to show the Daniel where the lizards could be found. Then, in the final reel, the poacher turns gamekeeper, and Gilberto became one of the project’s staunchest supporters!

Since this time, the project has undertaken a number of different activities to safeguard the target species from extinction. The main strategies are as follows:

HNR is managed by Zootropic, with three local forest guards who patrol the area and serve as promoters of wildlife conservation. We also collaborate with the local government at the National Council of Protected Areas -CONAP- for intelligence data on wildlife trade.

We promote HNR and its scientific station as a centre for scientific tourism, receiving on average 800 visitors a year. This spreads benefits to local communities, as we hire people for guiding, maintenance labour, and also as food providers for the visitors.

We have also promoted changes in regulatory policies to ensure the short and mid-term development of community based sustainable use programs for bromeliads and iguanas.

Along with the National Forestry Institute we have promoted payments for ecosystem services to landowners who still have dry forest cover on their properties, as part of the PINPEP forestry incentive program, managed by the Guatemalan government. Currently, around 250 ha of land surrounding HNR is included within this program.

We are promoting the development of community greenhouses for the production of local dry forest timber trees, which will be used in reforestation programs by other institutions, as part of the National Strategy for dry rorest restoration. Selling these trees will also provide an income to local villagers.

We have promoted the conservation of dry forest, and its inhabitants, especially the Guatemalan Beaded Lizard, since 2003 with our community-based monitoring program. Local villagers help us search for beaded lizards, and if they find one, they can put a name to it. A diploma and a sense of ownership of these wild lizards had been crucial for the involvement of locals into the project.

Since 2003 we have implemented an education program reaching more than 1,500 children of elementary schools each year.

The project had been incredibly successful, with no record of wildlife smuggling in the target species since 2010. Aversive hunting has also significantly reduced, and in the last 10 years we had only one report of aversive hunting of the Guatemalan beaded lizard. Hunting for bushmeat of the Guatemalan spiny tailed iguanas has decreased significantly, and in the mid-term, we expect to develop a sustainable harvest program for the species, including captive propagation managed by locals in a way to promote conservation and food security in the villages.

More evidence of the success of the project is that every beaded lizard and iguana found is marked with PIT-tags (internal microchips). We have found individuals roaming in the wild with PIT-tags as old as 2006, meaning that the wild animals are still there and haven't been poached or smuggled.

Habitat loss has largely stopped since 2015, with most of the habitat surrounding HNR now within forestry incentives for conservation, granted by the Guatemalan government.

The success of the project was mainly the involvement of local villagers, but also the development of a long-term relationship with government agencies and locals that was crucial for building trust.

Initially we promoted law reinforcement along with incentives to local villagers to get involved in the program. Now, with the pass of time, locals are firmly committed to the project and are spreading the word to new generations.

An environmental education program, aimed at elementary school children, has had positive results regarding the knowledge of scholars and teachers on the C. palearis, which, for many children and adults, was almost unknown to the degree of confusing it with its near species C. similis.

Several children have given us C. palearis iguanas that have been found in their schools to be released at Heloderma Natural Reserve, rather than kill them for fun as has been done before the education program.

It is gratifying to listen to teachers and parents who tell us that they are no longer eating the iguana and this is because their children are carrying the message of caring for the iguana.

Trade in live reptiles, its impact on wild populations, and the role of the European market

The situation in Central America is optimal for illegal trade: there is a high demand for many species, a lack of enforcement, bribery is well accepted, and immense poverty causes people to take risks for little profit. In addition, border control and government communication between countries is lacking, and smuggling routes are already well established because of the drug trade. Guatemala has been identified as an important route into El Salvador, from which animals are sent to Europe along with legal shipments of green iguanas.

In Europe, the entrance ports are usually the Czech Republic and Spain. In 2009, individuals that had followed this route were confiscated from a private zoo in Denmark. The remaining population of lizards is believed to be c.500 individuals. From 1993 to 2003 at least 10% of the population was taken from the wild to supply the illegal pet trade in the USA and Europe.

The Law Enforcement Management Information System of the U.S. Fish and Wildlife Service, reported 240 wild-caught spiny-tailed iguanas endemic to the Motagua Valley, Guatemala, taken for commercial purposes in 2008, allegedly unknown to Guatemalan authorities. Locals advised that 50–60 individuals were collected for export each month and that they have noticed a dramatic decline of the species in the past 20 years. Researchers
visiting these areas reported the extirpation of several of these populations following extensive surveys.