Maasai Wilderness Conservation Trust (MWCT) was established in 2000 by the Maasai of Kuku Group Ranch as a grassroots conservation trust. The trust focuses on the Maasai landscape and the communities of Kenya’s Chyulu Hills, which are set within the Amboseli-Tsavo region of southern Kenya. The trust operates as a non-profit entity and aims to conserve the wildlife and cultural heritage of the region by focusing on initiatives that create sustainable economic benefits for the Maasai community, providing them with an alternative income source to intensive agriculture.

The Chyulu Hills is located in Amboseli Tsavo region of Kenya, covering 12,000 acres across two conservancies.

Elephants are the most commonly poached species for international ivory demand. 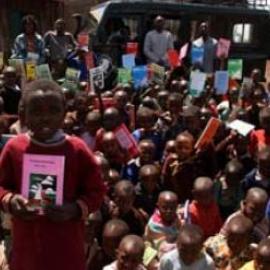 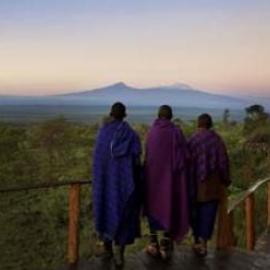 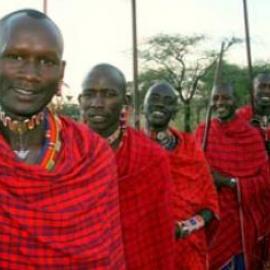 The partnership between the Maasai Wilderness Conservation Trust and the Maasai of Kuku Group Ranch is based around an ecolodge, Campi ya Kanzi, on Kuku Group Ranch land. The primary intention of the ecolodge is to create a tourism revenue stream that benefits the local community.

MWCT’s conservation programme operates via lease payments for conservancy zones. To date, the group has negotiated and secured two such management deals to protect a grassland habitat reserve and a critical wetland, totalling 12,000 acres, both of which lie within the migration corridor between the two national parks (Amboseli and Tsavo West National Parks). These deals allow the community to be compensated for their stewardship of the local ecosystem, funding the creation of alternative livelihood options, which has been important in a cattle-dependent local economy that increasingly suffers from the impacts of prolonged droughts.

MCWT's conservation programme also supports predator monitoring and the use of community wildlife rangers. Over 100 Maasai community members are employed by the trust as game guards and predator monitors. The programme, which is carried out in partnership with KWS, aims to prevent illegal activities (in particular poaching), to minimise human-wildlife conflict and to monitor biodiversity in the region.

Another important dimension of MCWT's efforts is the initiative, Wildlife Pays, which financially compensates herders who lose livestock to wildlife predation in exchange for their full participation in wildlife protection activities. The programme was started as a way of reducing revenge killing of wildlife and to bring herders more fully into the fold of conservation efforts. In addition to financing other actions that help to mitigate human-wildlife conflicts – such as the construction of lion-proof livestock enclosures – Wildlife Pays is working to generate a more positive attitude among the Maasai towards wildlife conservation. Wildlife Pays is self-sufficient and does not rely on philanthropic funding. Surcharges levied on tourists visiting the area to see wildlife more than cover the annual costs of compensation, establishing a pioneering and sustainable new payment for ecosystem services model around the protection of wildlife.

Special emphasis has been placed by the trust on working to ensure the full and active engagement and participation of women in conservation and natural resource management activities. As one example, the first female community rangers were employed in 2011, which has engaged local women in the monitoring of wildlife. Additionally, four of the ten of the trust’s Advisory Board members are women from the Kuku Group Ranch community. Although this may not seem overly significant it is a relatively progressive achievement in the context of Maasai traditions.

MWCT employs 135 community rangers to protect wildlife and wilderness. The rangers are from the local Maasai community and operate under a formalised partnership with Kenya Wildlife Service.

Community members benefit from tourism as a conservation incentive. In addition, an employment agreement reached with the ecolodge and MWCT means that 95 % of lodge staff are sourced from the local community. Ecotourism revenue also funds community health and education programmes, including scholarships, teacher salaries and clean water.

Human wildlife conflict is addressed as a way to decrease incentives for revenge killing of wildlife. Through the 'Wildlife Pays' programme herders receive quarterly payments for the value of any livestock losses. Lion proof fences have also been implemented.

The MWCT has also prioritised training and capacity building for a new generation of leaders within the Maasai community. Training provides Maasai employed by MWCT with new skills in sustainable natural resource management that complement local traditional knowledge.

The conservation programme has helped to mitigate unsustainable practices, improving ecosystem resilience and bolstering the prospects for long-term environmental health. Importantly, the wildlife migration corridors between Amboseli and Tsavo have been fortified and protected, including a 79% decrease in wildlife poaching since 2013. In total 135 community rangers are employed, who patrol nearly 40,000 km every year. In addition, a lion tracking programme has collared 7 lions, with 4 lion hunts prevented in 2019.

As a result of the Wildlife Pays programme, predator mortality rates have massively reduced. By creating an incentive to engage in conservation efforts and abandon revenge killings, the trust has been able to effectively protect a number of charismatic predator species. In 2018, the programme paid out nearly US$85,000.

MWCT partnered with Zoological Society of London (ZSL) to monitor species in conjunction with Tsavo National Park research teams, with the aim to back up anecdotal and qualitative information with scientific data.

The trust has allowed the Maasai to continue their pastoralist way of life by combining conservation with sustainable livelihoods. This has important environmental impacts because it supports the Maasai in their traditional practices, rather than forcing them to turn to other means such as farming.

Revenues from the ecolodge to the community have been substantial and are roughly US$ 400,000 per year. This has bought new employment opportunities and improved wellbeing – 95% of staff at MWCT and the ecolodge come from local communities. The trust employs over 100 people who are better placed to weather economic shocks, such as those from drought. Community members are trained in sustainable wildlife management and the trust is working to expand livelihood opportunities.

Within its education programme, the trust supports 25 local primary schools and one secondary school, serving over 9,000 students. MWCT is the single largest employer of teachers in the area and the scholarship programme has also helped over 60 students. In addition, MWCT has built classrooms, houses, a library, plus provided clean water and solar power to one primary school. It is hoped this can be replicated across the other schools in Kuku.

The trust's health programme employs the area’s only doctor, has trained over 100 community health workers and supports 5 health facilities, with over 17,000 patients seen in 2019.

At the moment, MWCT is primarily funded through outside donors. The trust recognises the need to create a measure of financial independence and self-sufficiency and is taking steps to explore innovative funding options that would reduce its reliance on philanthropy. Despite this dependence, MWCT does not rely on any one source of funding, but has been able to develop a diverse portfolio of donor sources. The conservation levy charged to eco-lodge visitors has been a central source of self-generated revenue and has been used to create employment and to fund conservation activities.