Around the periphery of South Salonga Park in the Democratic Republic of the Congo, a small, local NGO - Synergie Rurale - Action Paysanne (SyR-AP) - and people from local communities have devised and implemented strategies to protect pangolins from poachers and IWT. These strategies educate and actively engage the Batere community in anti-poaching activities, and it is having the desired result - poaching has been reduced and people are committed to protecting these animals.

The community, through their traditional leader, has engaged with SyR-AP to ensure local protection of three species of pangolins and their natural habitat. The traditional leader of this community has set aside four forests for conservation and has turned 10 former hunters into trackers (rangers) to ensure surveillance, awareness raising of local people and collaboration with scientists. Several giant pangolin burrows are identified and monitored, and others are still in the process of being identified to confirm their viability. Local people have significantly reduced their pressure on the conservation forest.

The initiative focuses on the periphery of the South Salonga Park, in the outskirts of the Salonga-Lukenie-Sankuru landscape in the chiefdom of Batere, in the Democratic Republic of Congo. It is on the edge of the equatorial forest at the boundary between the territory of Kutu and Oshwe. This area is 600 km away from the city of Kinshasa and Brazzaville.

The ecosystems present in the area are best described as 'forest-savanna-crop mosaic', the vegetation consists of marshy primary forest along creeks and herbaceous and shrubby savannas on clay soil (Kutu Agricultural Development Plan, January 2010).

The Batere community is homogeneous and hospitable and are very proud and respectful of their traditions: they respect traditional principles and traditional leaders. They are rural, subsisting primarily from hunting and agriculture.

The initiative is undertaken in five forests with a total area between 150 and 200 km² (estimation made by chieftain's agriculture services and CARG, January 2010). The area of the whole chieftaincy is 3,260 km² and its population to be in around 71,500. Approximately 4,000 people reside in nine villages that border the project area (i.e. the five forests) and these are the direct beneficiaries of the initiative.

The species are marketed both for local consumption (meat) and for international trade (scales). 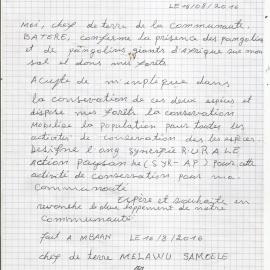 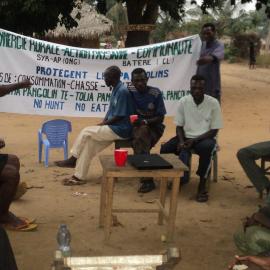 There are two types of poacher:

1. Domestic hunting is carried out by local people for subsistence and to trade meat for a small income. These people are usually very poor and lack alternative ways of earning an income.

2. Poaching for commercial trade is carried out by people fleeing pressure and control in the South Salonga Park and financed by smugglers in search of scales. The smugglers are usually from a big city and can include corrupt state officials. People usually become involved in people because of poverty, and also tend to be ignorant of wildlife regulations and specifically the protection of pangolins.

The activities of park rangers/guards within Salonga Park keep poachers restricted to the peripheries of the park  which is where most poaching is carried out.

This project is led and managed by Mr. Claude Keboy Mov Linkey Iflankoy, coordinator of the local NGO SyR-AP. Mr. Keboy is motivated to fight against illegal trade and poaching because of his passion to protect animals and concern of the gradual disappearance of species such as pangolins and excessive poaching of elephants, and to compensate for the inability of others, including government, to effectively control poaching, IWT, and conserve these species. The traditional Chief is also raising awareness in order to ensure the involvement of his people in the Chiefdom.

This initiative began in 2010 in collaboration with local community representatives and the traditional Chief. SyR-AP and local people have devised and implemented the following strategies to protect pangolins (and elephants) from poachers.

The community is involved in all of the strategies described above.

SyR-AP also organises regular meetings with representatives of the villages bordering the project area in order to assess the level of protection and collect data with the participation of the community.

The project targets adult men and women who actively use the forest to feed their families. The products of the forests are those that feed and ensure the income of the families. It also specifically targets young people who are usually involved in illegal trade.

It has also been effective in transforming hunters into trackers and rangers. The 10 most dangerous hunters identified by the traditional chief have become forest guards (trackers), and the village chiefs (representatives of the state) living near the conservation forests became involved by denouncing poachers and questioning them.

A letter of commitment from the traditional Chief has been signed and a campaign to remove the traps was organised in 4 conservation forests by the villages surrounding the conservation forests. The monitoring of markets and ports of shipment of agricultural products and the low number of seizures of scales have demonstrated the reduction of the scale trade.

This project, which started in 2010, has established a mutual, consistent and sustainable trust with the community through tenacity and motivation. Local traditional leaders have consciously understood the need to manage their natural resources by taking advantage of the expertise of SyR-AP in order to benefit from alternative activities to increase the income.

The initiative has been effective as it has centred on strengthening traditional customs that prohibit the hunting of the giant pangolin - local communities remain respectful of these traditions and the consequences for breaking them.

Local people have also been dissuaded from hunting pangolins through education and traditional leaders nominating members of the local community - often former poachers - to become scouts and to monitor and guard pangolin dens, which provided alternative livelihoods to people who were previously involved in illegal activity.

The buy-in and cooperation of traditional leaders has been critical for success.

Four factors have hindered the efficient and effective progress and implementation of the initiative, as well as instilling doubt in local people about the importance of the conservation of wildlife and its habitat, namely:

Batere community gets involved to the protection of giant pangolins

- Save Pangolin (US based)