The Wildlife Conservation Society (WCS) has been working in the Wakhan Corridor since 2006 to help conserve the snow leopard. The initiative has adopted an integrated management approach, that includes local governance, ranger patrols, education, construction of predator-proof livestock corrals, a livestock insurance program, tourism, and research activities. The project is building the capacity of local communities to develop sustainable natural resource management plans. It is hoped that community-led and adaptive management will allow snow leopards to increase in numbers, bring increased stability to local livelihoods and open doors to new opportunities through activities such as tourism.

The Wakhan Corridor is a narrow strip of land in Badakhshan province, in the far northeast of Afghanistan. The Wakhan is one of the most remote and isolated mountain landscapes in the world and represents a very important part of the snow leopard's range. The area is primarily occupied by two ethnic minorities, who are extremely disadvantaged and heavily dependent on natural resources for survival.

Snow leopards are poached for their pelts for the fur trade as well as captured live for the pet trade. 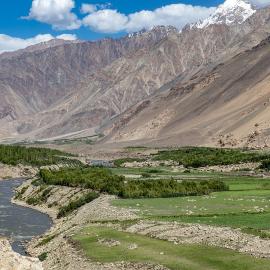 Snow leopards are valuable species and can be a key source of cash for impoverished communities, leading to poaching for furs and live animals for pets or zoos. Furthermore, retaliatory killings of snow leopards for livestock depredation is common among the poor and livestock-dependent communities of the Wakhan and has the potential to drive the species towards local extinction.

In particular, the illegal trade in pelts is a major regional threat and Afghanistan has a long-standing history of involvement in the fur trade. In the past, the local communities in Wakhan have reported that the fur trade has stopped in the area, although it is not clear if this is the case and there continues to be an active demand for snow leopard furs.

WCS also found that the military was driving demand for snow leopard and other endangered species products via markets set up on military bases.

The project focuses on helping the community to use and develop their capacity for sustainable natural resource management in ways that achieve conservation.

With assistance from WCS, the community developed a governance structure enabling functionality across the geographical area and the two ethic groups. To achieve this, the Wakhan-Pamir Association (WPA) was established as a legally recognised social organisation belonging to the people of Wakhan and managed by a Board elected by the community. The Board makes decisions on behalf of the community and is mandated to oversee sustainable natural resource management and socio-economic development in Wakhan. The WPA receives support and training in conservation management and livelihood development, working to link the communities across the region, enhancing their strength and ability to protect the snow leopard.

A ranger program was developed in 2008, with 54 rangers hired and trained from the local community and 5 rangers employed by the government. Rangers are grouped into teams and the WPA and government manage their respective employees. Each ranger is responsible for monitoring illegal activities around their village and teams carry out patrols and survey wildlife on a monthly basis.

The presence of rangers provides the community with ways to engage and manage conservation and they were critical to the development of an information network throughout the region. This led to reduced instances where wildlife crimes go unreported.

Rangers receive a uniform and field gear and each team is also given equipment to survey wildlife. Additionally, training activities are provided annually and a dedicated field trainer with extensive knowledge of the snow leopard works with the rangers to develop their skills. Furthermore, since 2009 WCS has assisted rangers in carrying out camera trap surveys.

In addition, in collaboration with the US military, and the US Department of State, WCS conducted training sessions for military police, soldiers and Afghan vendors to raise awareness regarding laws prohibiting wildlife trade and the impact of the trade Afghanistan.

Tourism offers potential for livelihood improvement for the communities living in Wakhan and tourist numbers have increased since 2005, providing a cash stimulus to the local economy. Tourism can be implemented successfully in partnership with wildlife conservation and it is hoped that species such as the snow leopard will be a major factor in increasing tourist numbers in the future.

In 2010, in response to incidents of retaliatory killings, WCS began working on initiatives to help ease the psychological and financial impacts suffered by livestock owners, to eventually bring about the reduction of hunting predator species.

- In August 2010, a pilot insurance program was started in a small village, with the primary objective of testing and developing an insurance model that could be scaled up across the region to help quantify the reality of predation for the community.

- The insurance program was designed to be entirely community owned and managed. To initiate the program, all families in the village pooled money to create a core savings fund and WCS also contributed some seed money.

- The community decides upon livestock insurance and compensation rates, which take into consideration past predation levels to help ensure funds do not get overdrawn.

- An aim of the initiative was that the fund would continue to grow to eventually provide savings for the village to use for sustainable development activities.

In addition to the above, training was provided to shepherds including on how to use a whistle and dogs to control livestock movement, in order to prevent moving stock to areas where they are at risk and so lessen predation.

In addition to tourism, it is hoped that ‘snow leopard friendly’ products such as handicrafts from the local communities can be developed and marketed. The general aim is to directly link snow leopards to sustainable forms of income in the belief that the local community will increase their willingness and incentive to conserve the species in the long-term.

The project places an emphasis on education and awareness and initially, this focused on village-to-village consultation activities plus a number of targeted international exposure visits. On one visit, to Gilgit-Balistan (Pakistan), the Wakhan community saw how the locals had achieved an impressive level of development in harmony with wildlife: here wild ungulates graze in peace in the vicinity of highways. After this visit, the Wakhi leadership began discussing plans for the community to develop no-hunting regulations.

A School Environmental Education Program has also been established to connect students and their teachers with the local environment through the collection of data such as fuelwood consumption and wildlife observations. The program has shown itself to be a powerful tool for educating and changing attitudes among the adults and it is largely attributable to the cultural shift towards conservation. In addition, each school holds a ‘Parents’ Day’ event in the summer, allowing the children to showcase to their parents the environmental learning they have achieved through the program. This activity is helping to integrate conservation with the culture of the local people.

Camera trapping has also been used to raise awareness of snow leopards. The photographs have been powerful in bringing the community closer to wildlife and fostering pride in their landscape.

In 2014, WCS facilitated the process of creating the Wakhan National Park, which now protects roughly 70% of snow leopard habitat in the country. In addition, the government’s National Environmental Protection Agency officially listed the snow leopard as a legally protected species in 2009, and in 2013, WCS helped draft the National Snow Leopard Ecosystem Protection Plan.

Awareness raising amongst the Afghan military of their impact on endangered species resulted in very few prohibited wildlife furs found in follow up visits to military bases.

The Wakhan Corridor in northeast Afghanistan is an area known for relatively abundant wildlife and it appears to represent Afghanistan’s most important snow leopard landscape. The Wildlife Conservation Society (WCS) has been working in Wakhan since 2006. Recent camera trap surveys have documented the presence of snow leopards at 16 different locations in the landscape. These are the first camera trap records of snow leopards in Afghanistan. Threats to snow leopards in the region include the fur trade, retaliatory killing by shepherds and the capture of live animals for pets. WCS is developing an integrated management approach for this species, involving local governance, protection by a cadre of rangers, education, construction of predator-proof livestock corrals, a livestock insurance program, tourism, and research activities. This management approach is expected to contribute significantly to the conservation of snow leopards and other wildlife species in the Wakhan.

Afghanistan is one of the twelve countries inhabited by the rare and exquisite snow leopard. The species resides in the country’s remote and peaceful Wakhan Corridor in the northern province of Badakhshan and at the eastern Afghanistan/Pakistan border in the provinces of Nuristan and Badakhshan. To protect snow leopards, WCS conducts foundational research, reduces illegal trade in snow leopard skins, protects snow leopard prey, establishes legislative protection, and works with communities to prevent retaliatory killing after livestock losses.