Of the estimated 400-500 Sumatran tigers remaining in the wild, approximately 150 are found in and around Kerinci Seblat National Park. Since 2000, Fauna & Flora International (FFI) has been working with the park authorities and local communities to strengthen tiger protection through forest patrols, undercover investigations and law enforcement operations to combat the trafficking of tigers and their body parts. The work of the tiger protection units has led to the successful prosecution of dozens of poachers and traders. The team also conducts human-wildlife conflict mitigation, responds to wildlife emergencies and works to secure key tiger habitat in and around the park.

The 13,800 km2 Kerinci Seblat National Park spans the Indonesian provinces of West Sumatra, Jambi, Bengkulu and South Sumatra. Its forests and wildlife are managed by a single agency under the Ministry of Environment and Forestry. The elongated shape of the park and the enclave within creates a long permeable edge that is predominantly bordered by lower elevation smallholder farms. Its interior runs along the backbone of the Sumatra-long Barisan mountain chain that is rugged, remote and should therefore be less vulnerable to poaching than its edges. The National Park is recognized as a UNESCO World Heritage Site for its rich biodiversity and a global priority for the long-term survival of wild tigers.

One of the main threats to Sumatran tigers is poaching. Hunters trap or shoot them for their skin, bones and canines, which are in high demand as status symbols, primarily overseas, and for use in East Asian traditional medicine. 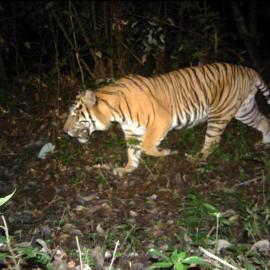 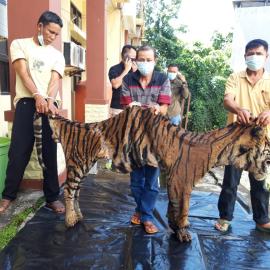 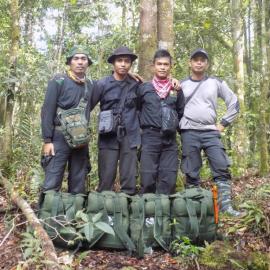 Tigers in the National Park and its adjacent forests are threatened by poaching, domestic trade and conflicts with forest-edge communities. Snare traps are abundant in the park, set for tigers and their prey including sambar, wild boar and muntjac.

Kerinci Seblat National Park was one of the few protected areas in Asia where a core tiger sub-population, which is the primary focus of patrols, has stabilised from 2005-present. This was due to the improved protection afforded by the Tiger Protection and Conservation Units.

From 2013 – 2015 a major spike in poaching threat was recorded, driven by organised illegal wildlife trade syndicates. However, following targeted, intelligence-led law enforcement this threat has now declined, paving the way for recovery.

In 2000, to protect tigers and their principal prey, the National Park authority and FFI established two Tiger Protection and Conservation Units, hereafter referred to as ‘patrol teams’. The mandate of the patrol teams is to secure the population of wild tigers inside the National Park and its adjacent forests through reducing the threats from poaching, domestic trade and HWC with forest-edge communities.

By 2005, the number of patrol teams increased to six, each with its own distinct area of operation (nb. in 2006, one team had to be discontinued because of resource limitations). Each patrol team is composed of three rangers drawn from forest-edge communities and is led by a national park ranger. More than 500 dedicated national park and community forest rangers who conduct anti-poaching forest patrols, remove snares and deter would-be poachers, have been trained.

This work is supported by a carefully cultivated network of local informants, who play a key role in guiding patrols to tackle active poaching and supporting undercover investigations to identify tiger poachers and traders. Teams then work with the relevant authorities to support law enforcement and prosecution of poachers and traders. We have also set up a local network for recording and reporting illegal logging.

Local intelligence informants typically live in villages close to the forest edge and contact their 'handler' (the ranger with whom they are most familiar) when they either see or hear of a suspicious person entering the forest. There are approximately 30 ‘open’ informants, comprising family and friends of the rangers, and another 30 ‘closed’ informants, with whom the project staff are friendly but have not revealed their identity. These latter informants tend to be individuals who are known to associate with hunters and traders and are actively involved in lower grade hunting and forest resource extraction.

Upon receiving a report, the patrol team will verify it with other field staff and, if deemed valid, will rapidly mobilise and patrol in the approximate location. Informants who advise of a suspicious person entering the forest will receive a small reward for their information, typically mobile phone credit or money for cigarettes. Further, unsolicited information advising of strangers entering the forest will not always receive a small tip-off fee so as to deter disingenuous reporting.

Strategic guidance and liaison with the park’s neighbours is provided by FFI, whereas operational field command is provided by National Park staff who are assigned to the teams and work in partnership with community members, who are recognised as honorary park officers.

Tigers, especially young transients looking to establish their own home range, occasionally wander out of the forest and into farmland. Usually the tiger simply passes through and safely returns back to the forest, but sometimes it will take a cow or a dog and – very occasionally – attacks a person.

To address local concerns and prevent retaliatory killing of real or perceived ‘problem tigers’, swift responses from conservation teams are needed. We have established rapid response units that react quickly to human-tiger conflict and have prevented many unnecessary killings and captures of wild tigers.

Occasionally, tigers may be caught in snare traps, set by farmers for crop-raiding wild pigs. In these cases, we rapidly mobilise veterinary support to care for the tiger, with a primary aim of releasing a fully recovered animal back into the wild.

To assess the impact of the conservation work we carry out with our partners, we set remotely activated camera traps in the forest to monitor tiger population trends – this monitoring supports and informs protection and conservation strategies.

An intelligence network is primarily managed by the community ranger members of a patrol team. Informants typically live in villages close to the forest edge and contact rangers when they see or hear a suspicious person entering the forest. Informants - and others monitoring known or suspected poacher movements using sympathetic village informants - receive a small reward for their information, typically mobile phone credit or money for cigarettes.

To address local concerns and prevent retaliatory killing of real or perceived ‘problem tigers’, swift responses from conservation teams are needed. We have established rapid response units that react quickly to human-tiger conflict and have prevented many unnecessary killings and captures of wild tigers.

As a result of this 'intelligence-led law enforcement' approach, Kerinci Seblat National Park was one of the few protected areas in Asia where, park-wide, a core tiger sub-population has stabilised (2005-present). Where there were relatively frequent ranger patrols fewer snares were found, and patrols responding to 'tip-offs' from local informants were significantly more likely to detect snares (by more than 40%) than routine patrols.

From 2000-2010, 30 tiger poachers and traders (including district government, parliament and army personnel) were arrested with direct support from the teams. Of these, 90% were successfully prosecuted and sentenced to 3–36 months in prison, with an average sentence length of 13 months. To progress this, a milestone was achieved in the signing of an MOU between four provincial police forces and the Kerinci Seblat National Park authority to improve intelligence reports for patrolling and evidence gathering for prosecutions.

Between 2012 and 2015, after years of declining threat, tigers in Kerinci Seblat were the focus of a surge in illegal wildlife trade-driven poaching. We responded by strengthening information networks to support patrol deployment while working to identify the poachers and traders driving the threat and to support law enforcement.

Since January 2016, 15 tiger poachers and traders have been arrested, prosecuted and jailed, and we have seen dramatic falls in poaching threat across the landscape, wildlife trade networks disrupted, and the scene set for a recovery of the tiger population in the area.

Our results not only demonstrate the effectiveness of the Kerinci Seblat law enforcement strategy in protecting wildlife but highlights the benefits from cultivating a network of reliable informants: the law enforcement strategy in deterred illegal hunting in the area, thereby creating the enabling conditions for a stable prey base. Expansion of the area covered by patrols in combination of a larger, more widespread, information network would bring further conservation gains to the tiger.

Our camera-trap data provided reassuring results of a stable prey base across four distinct study areas with wide spatial coverage across the national park. Future studies should plan to measure prey abundance or, better still, biomass metric, instead of occupancy, as this has been shown to be a reliable predictor of tiger density.

The frequency rather than intensity of patrols yielded the greatest benefits in reducing illegal hunting, consistent with findings from other studies that have identified poacher detection in the field as being important.

Despite the positive outcomes in our study, tigers and their prey continue to be poached in the Kerinci Seblat landscape.

There is a need to conduct frequent analyses to enable ongoing adaptive management of the situation. For Kerinci Seblat, this should include increasing the number of patrol teams to cover a wider area and strengthening actions to identify and arrest traders who are often based in cities far from the protected area but, nevertheless, form the local source of demand.

Equally important will be maintaining a minimum level of routine law enforcement in the well-established patrol areas, to ensure that levels of deterrence do not drop and poachers return.