It is named after a small Caribbean island belonging to St Vincent and the Grenadines, lying roughly halfway between this country and neighbouring Grenada.

The only known population of this vanishingly rare gecko is confined to a small range. In addition, its single population’s numbers are rapidly declining as a result of rampant poaching for the illegal pet trade.

For the protection of this species, the Saint Vincent and the Grenadines Forestry Department, the Union Island Environmental Alliance (UIEA), the Saint Vincent and the Grenadines Preservation Fund, and Fauna & Flora International (FFI), have been working hand in hand since 2017, focusing not only in the protection of the gecko and its unique habitat, but also on facilitating sustainable livelihoods and pride campaigns in the nearby communities.

The project is taking place in Union Island, the Southernmost Grenadine Island within Saint Vincent and the Grenadines.

Live animals for the pet trade 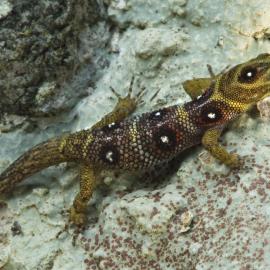 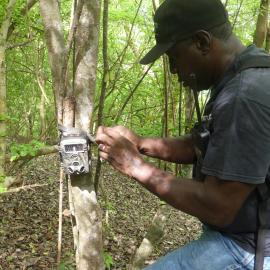 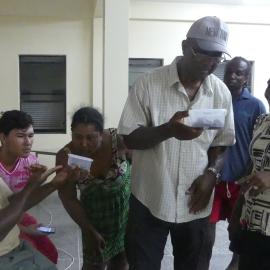 The poaching of live animals for pet trade was mostly performed by people coming from outside the community, with information provided by community members. The community members are not involved in this activity anymore, after a community-based pride campaign.

The UIEA (local CBO) and the Saint Vincent and the Grenadines Forestry Department (a government agency) are spearheading the work against the poaching and trade of endemic reptiles in the country, with support from FFI. The motivation is to save the Union Island gecko from an inevitable extinction due to extraction to be sold in Europe and the USA.

- On-the-ground protection: The project hired community wardens who started patrolling the species range. The presence of the wardens in the forests has been a deterrent for poachers to get in the area freely. In addition, creating this economic incentive to community members has helped them embrace the conservation actions and see the gecko as an asset beyond it being smuggled out and sold internationally.

- Capacity building: Members of the UIEA; the SVG Forestry Department; and other agencies in the front line of the work against poaching and illegal international trade, such as Customs, and the Police, have been trained on Counter Wildlife Crime techniques and the use of the Spatial, Monitoring and Reporting Tool (SMART) to improve their anti-poaching and anti-trade skills.

- Awareness-raising and pride campaigns: A pride campaign, including awareness-raising activities in both SVG and international media (namely National Geographic) have raised the profile of the Union Island gecko as a priority species to protect. Through the awareness-rising and pride campaigns, many community members have decided to engage in the protection of the Union Island gecko by enhancing its habitat, calling the community wardens when suspicious behaviour is encountered in the gecko range and spreading the word about the uniqueness and the need for protection of the gecko.

- International collaboration and policy: The project facilitated communication among the source, transhipping and destination counties. In addition, Saint Vincent and the Grenadines sought international support against the trade of this species by proposing the listing of the Union Island gecko on Appendix I CITES, which was accomplished in 2019.

- Nature-based livelihoods: The project is developing a sustainable tourism plan for Union Island, which would tap into the unique opportunity that the Chatham Bay Key Biodiversity Area and its biodiversity brings as a tourism attraction

The activities have been as inclusive as possible. The community meetings have been organised at times when both men and women in the community could attend. Women were encouraged to participate in training courses scheduled for government and community based agencies.

Three of the seven community wardens are female.

The project hired community wardens to protect the range of the Union Island gecko and organises voluntary activities such as clean-ups. Community meetings were organised to raise awareness about the species among the community, and as a reminder about wildlife laws and regulations in the country.

The project is working on a sustainable tourism model that would help providing livelihoods to the community without destroying the species habitat. Also, the species would work as a flagship for souvenirs and wildlife-related activities such as guided tours.

The project is supporting small enterprises on Union Island to provide sustained income to the inhabitants of the island.

The project has also lead to a focus upon applying for additional financial resources to help tackle some intractable challenges that the community faces such as the high cost of electricity and unreliable water supply, over-reliance upon imported food items and restoration of upland habitats

A pride campaign was organised to build a feeling of ownership within the community. It has been welcomed by the community, with many people regularly contributing to the gecko's protection by calling the protection hotline, enhancing the gecko habitat.

Activities such as “warden for a day” have been delivered in the local school and high school to bring the species and the forest closer to the day-to-day life of the children in the communities.

Since the community wardens started patrolling the gecko range, there has been an obvious decrease in poaching signs in the forest (less overturned rocks for instance). In addition, since the project began, the availability of Union Island geckoes online has decreased by over 80%

Other activities damaging the gecko's habitat, such as stone mining or illegal logging, have also ceased due to the presence of the wardens in the area

One of the main factors that helped the project's success was working closely with the community, understanding their reality and their needs, and how they understood the conservation needs for the area.

Between 2017 and 2019, after hiring the community wardens, a 56% reduction in availability online for the Union Island gecko was observed. In addition, from 2019 to 2020, after listing the Union Island gecko in CITES Appendix I, there was an additional reduction of 25% in the online presence of Union Island geckos for sale or demand. Research suggests that the online trade has not moved to the dark web due to the pressure, but that traders are not interested in selling the individuals now that they are challenging to get from the wild, and there is international regulation for its trade

Successful designation of the gecko habitat as a protected area is still outstanding. The complexity of land ownership within the gecko habitat, conflicting desires within government of conservation vs development and economic pressures for foreign exchange through resort development remain explicit threats to the success of the venture. Bringing agency stakeholders together to agree on a strategy to secure designation is ongoing.

The SVG Wildlife Act is under revision to include specific regulations to cover the protection of the Union Island gecko. Pursuit of co-management agreements for the management of protected areas is being pursued by Gov of SVG in other PAs and is being pushed as the most suitable model by the project partners. A community survey in Jan 2021 with just under 10% of the Union Island population clearly showed a willingness and desire by local persons to have more agency in managing and protecting natural assets on the island.

US Fish and Wildlife Service